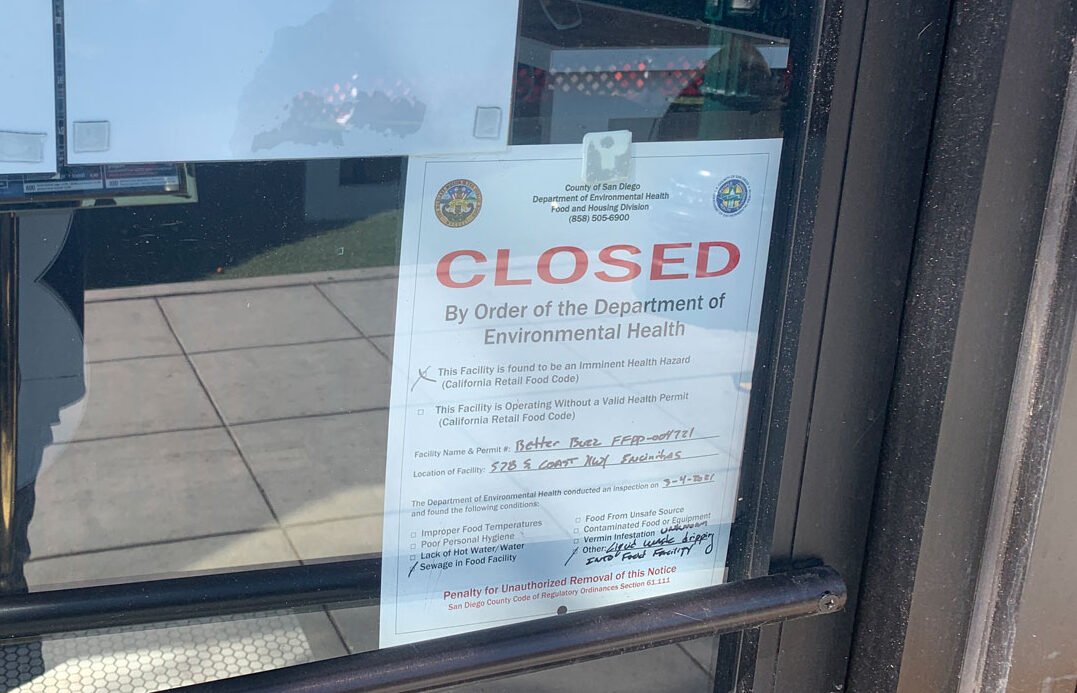 EDITOR’S NOTE: Since the publication of this article, Better Buzz has fixed the problem and reopened on the evening of Friday, March 5, according to Donna Durckel, group communications officer at the county’s Department of Environmental Health and Quality. Durckel explained the county investigated a complaint about a water leak from the ceiling at Better Buzz Coffee at 578 So. Hwy 101 in Encinitas. Inspectors found that water was leaking from the ceiling onto the area where food and beverages were prepared.

ENCINITAS — The county health department has temporarily closed a popular coffee shop on South Coast Highway in Encinitas due to a plumbing leak posing an “imminent health hazard,” according to a notice posted on the shop’s door.

As of Friday morning, Better Buzz Coffee Roasters remains closed due to an “unknown liquid waste dripping into food facility,” reads a notice from the San Diego County Department of Environmental Health and Quality. The notice was first posted on Thursday, March 4.

An employee at the Encinitas location said the issue had been fixed and the store was expected to reopen later today or tomorrow.

According to the county’s website, any facility forced to close upon discovery of an imminent health hazard will post a “CLOSED” sign in the front window of the establishment.

“A closed food facility must remain closed until written authorization to re-open is given by this department. All major violations must be corrected or a suitable alternative must be implemented before the facility is granted permission to re-open. The CLOSED sign is then replaced with a grade card,” according to the website.

Conditions that require the closure of a food facility include, but are not limited to, the following: