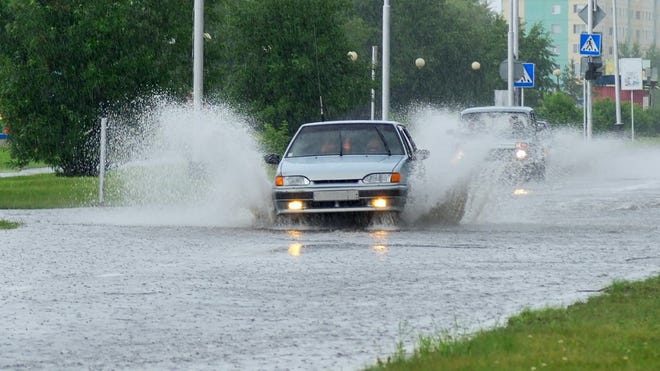 As widespread flooding struck Carlsbad in the wake of heavy rainfall the Monday and Tuesday, major roadways were blocked off and police and emergency responders patrolled the banks of the Pecos River to keep the public safe.

Here is what we know.

More storms on the way for Carlsbad.

Johnson said storms could produce heavy amounts of rain as they push off the higher terrain of western Eddy County.

“There’s potential for more flooding into the Pecos River,” he said.

Vanessa Hutchins along with Lionel and Jessica Granger were watching the skies and the nearby Lower Tansill Dam waiting for possible evacuations.

The neighbors live on South James Street. The Granger’s have lived in their home for nearly 30 years.

“We’ve been through this before,” said Lionel Granger.

“We’ve been through it three times already. Our house has been under a couple of feet of water too,” he said.

“Just playing the waiting game right now,” she said. “Friends and family have called us and told us to be at their house.”

In a Tweet, New Mexico Gov. Michelle Lujan Grisham said that the state is coordinating local resources in response to the flooding.

She wrote that the New Mexico Department of Health, Safety and Emergency Management “is maintaining close communication with local floodplain managers and the Army Corps of Engineers.”

“It is with much regret that I have learned about the flooding occurring in Carlsbad and communities throughout southeast New Mexico. Now is the time to follow instructions from local officials and State Homeland Security and to avoid flooded roads and areas. May this storm, which has brought much-needed moisture to our state, now pass quickly so our fellow New Mexicans can return home safely.”

The low water crossing at Calloway Drive was closed at 5 p.m., according to City of Carlsbad.

Water continues to rise at low water crossings throughout the city as expected thunderstorms began dropping more rain on the area.

Evacuations of the neighborhoods behind Lower Tansill Dams was still underway, officials said.

Evacuations continue for the neighborhoods bordering the Pecos River.

Canal Street remains open as of 4:52 p.m. Eddy County officials are battling rumors of a broken dam at Avalon Lake, saying only that overflow at the lake is causing high water levels.

“We are deeply concerned about the flooding in Eddy County. We strongly urge our community to take notice of any road closures and evacuations. Please follow instructions from officials and do not put yourself or others in dangerous situations during the storm. We will continue to follow updates on the storm, flooding and any closures and evacuations. Our thoughts and prayers are with our Eddy County communities and we will assist in any way possible as the storm passes and water recedes.”

At the San Jose Bridge, Carlsbad police Sgt. Josh Calder said motorists should avoid the area as the water flowed over the bridge, making it impassable.

He said he expected police and emergency crews would be at the scene all night with more rain forecast until at least midnight.

“Do not drive into that,” Calder said. “We’re waiting for it to recede. If you’re traveling north or south through town, the only road is going to be Canal for a while. With the warning we got, they’re saying it might last until midnight.

“I would imagine we’ll be out here all night keeping people from entering this roadway.”

Severe weather:What does home insurance cover after a disaster?

Carlsbad Mayor Dale Janway was at the scene as local residents gathered along the river banks to take photographs with their phones.

A drone flew overhead as the water could be seen rising up mere feet beneath the nearby parallel Canal Street Bridge where traffic was backed up on the city’s main thoroughfare.

“We needed the water but my gosh,” Janway said. “Don’t cross over the low water crossings. You can by the current that you can get swept away. We’re blocking off all the dangerous roads and working with the county to keep everyone safe.”

Dorothy Baker was visiting friends in Carlsbad when they heard the roads had flooded.

She and her friends quickly headed out to the San Jose Bridge to “check it out,” she said. 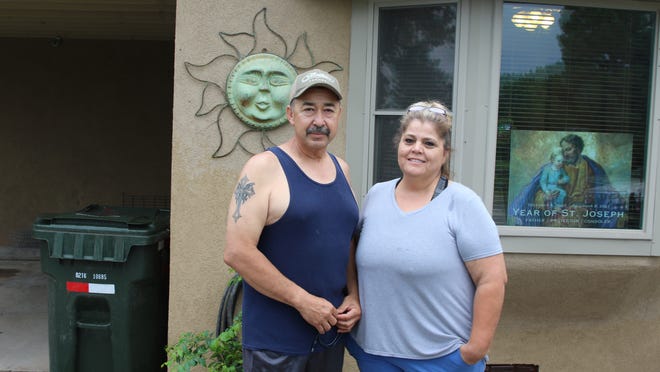 “We’re not sure that bridge is going to hold up,” Baker said. “This is crazy. We heard it was flooding so we came down here to see. You just don’t see this kind of thing.”

The Lower Tansill Dam and Reservoir in Carlsbad flooded prompting evacuation of residents on the 400 blocks of Nelson Street, James Street and Sooper Street.

Evacuees were being asked to assemble at Joe Stanley Elementary School.

The National Weather Service(NWS) in Midland, Texas issued flood warnings for the Pecos River around Carlsbad, below Dark Canyon and Malaga through Wednesday.

“It’s coming and going depending on where we’re at we had several areas farther south yesterday (Monday) that were seeing and experiencing flooding over the low water crossings.”

Canal Street at the bridge was not closed, Carlsbad City officials said, though they cautioned that with rising water it could potentially be closed by 4 p.m. to thru traffic.

Homeowners insurance:Review your policy and document belongings for when disaster strikes

Rain stopped and sunshine presented itself in some parts of Eddy County Tuesday afternoon. Johnson said additional precipitation forecast for the evening meant possible residual flooding for the Carlsbad area.

Rainfall chances for the rest of Tuesday afternoon were 77 percent, according to Johnson. As the afternoon progressed into the night, Johnson said the chances were 65 percent and chances Wednesday were 43 percent.

Current road closures in and around Eddy County

“In the event that you come to a low water crossing that is overflowing, do not attempt to cross it the water has more force than you think,” Burns said.