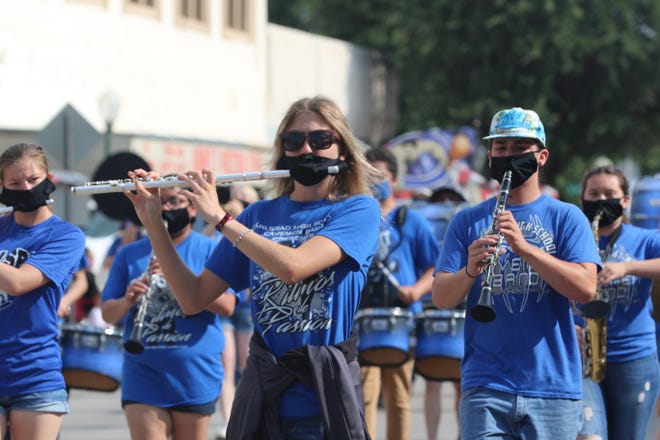 Carlsbad celebrated Memorial Day in its traditional manner May 31.

The Memorial Day parade traveled Canyon Street to the fanfare of residents. It ended in Bataan Memorial Park at Lower Tansil Dam, where a ceremony was organized by the City of Carlsbad and Eddy County Patriotic Society.

Eddy County Sheriff Mark Cage and Magistrate Judge D’Ann Read were guest speakers at the ceremony, which included the placement of a wreath and the firing of three volleys.

“This what we call a holiday started as decoration day in 1868, after the bloodies war which was the Civil War,” said Read.

“We changed it to Memorial Day and often people think it was specifically for World War I and World War II, but it’s not.”

Read’s address included a list of the number of dead in many of the U.S. biggest conflicts.

Read is a veteran of the U.S. Army.

“We thank them in humility and in humbleness. there is nothing more precious than the blood of someone who serves us who gives to us the ultimate sacrifice, their lives. I join you on this day to remember them,” Read said.

Cage followed Read in the ceremony,

“Memorial Day is such a hallowed day because those who made the ultimate sacrifice  die a second death when we forget them and allow their names to sail off into the wind,” Cage said.

“It is our obligation, our duty, to remember and speak their names if at no other time than we should today, on Memorial Day.”

Twenty-one white doves were released at the event in honor of the American servicemen and women who have died.

To view the complete event visit the City of Carlsbad Facebook page.