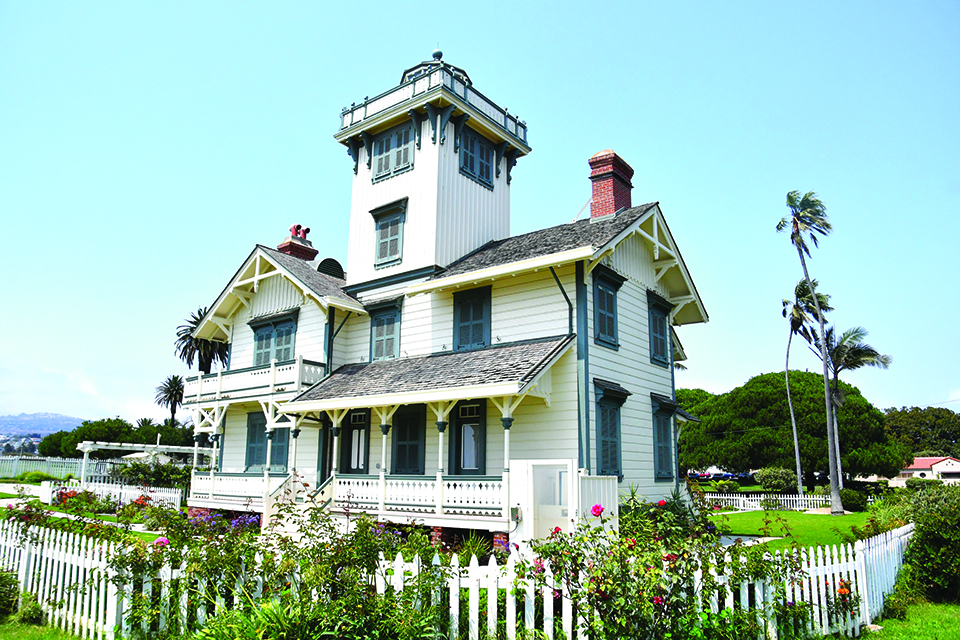 For this story, I’m starting at the end.

My husband and I were returning home from a 48-hour getaway in the Los Angeles neighborhood of San Pedro. Traveling north on the 110 toward the 405, we were surrounded by container trucks about a dozen deep on all sides.

Normally we’d have been perturbed and a bit anxious about being boxed in by these rolling behemoths, but after spending time around San Pedro’s waterfront, we knew that these trucks were hauling all the stuff consumers need and/or want: furniture, video games, blow dryers, computer parts, dishware, medical equipment and lots more.

Earlier in the day, standing on the jetty off San Pedro’s Cabrillo Beach, we could see three dozen container ships on the horizon in a holding pattern, waiting to offload at the Port of Los Angeles. Various reasons account for the backup — some of them pandemic-related — but once you understand what it takes to get that toaster to Target, you appreciate the importance of this biggest container port in North America.

The San Pedro neighborhood sits on the edge of all this essential commerce, but there is lots more to explore.

We spent much of our visit in outdoor San Pedro. Three reasons: Love the ocean air, the views are astounding, and it’s the safest place to be during this mercurial pandemic.

We began our one full day with a patio breakfast at the Pacific Diner, home of mammoth omelets. While Pacific Street seemed quiet, the neighborhood-eatery patios were filled with the melodious sounds of conversation and silverware.

“San Pedro was one of the first (in Los Angeles) to implement outdoor dining,” says Elise Swanson, president and CEO of the San Pedro Chamber of Commerce, and it’s evident that the concept has been successful.

Asked to characterize San Pedro, Swanson says that “our message is that we offer an authentic historic experience that appeals to the more adventurous visitor.”

I get that. You won’t find cliché Hollywood glitz, shallow sincerity or egocentrism in this neck of the Los Angeles woods. The history of San Pedro, its own city until it was incorporated into Los Angeles in 1909, is about people whose livelihoods depended on a thriving harbor and waterfront. That’s still true today, plus San Pedro offers numerous attractions in and around the port, as well as excellent casual dining, eclectic neighborhoods, arts and crafts galleries and workshops, museums, and city parks with spectacular ocean and city views.

We spent the remainder at several bluff-side parks, including Angels Gate Park, with the 17-ton bronze Korean Friendship Bell that hangs within a stunningly crafted stone pavilion; Point Fermin Park,  with the historic, Victorian-style Point Fermin Lighthouse, a playground, a concert venue, picnic tables and ample shade under the giant Moreton Bay fig trees; and White Point Nature Preserve, near the site of the White Point Landslide. This revenge of Mother Nature’s decimated a portion of Paseo Del Mar in 2011, and it’s not likely be restored, according to Swanson.

We stayed at the Doubletree by Hilton San Pedro, which offers both ideal location and ambiance. Located on the Cabrillo Marina, the pet-friendly hotel is a 10-minute walk to the white sands of Cabrillo Beach and the Cabrillo Marine Aquarium. Walk 10 minutes in the other direction and you’ll find the 22nd Street Landing Restaurant, where a window table gives a view of the marina and boats loading and unloading scuba divers.

And perhaps best of all, right outside the hotel’s back door is a waterfront walkway that hugs the Cabrillo Marina. You can walk in either direction for a good long while with nothing but a serene view of the harbor to keep you company.

The Doubletree also is on the route of the free, hop-on hop-off San Pedro Trolley, which stops every 30 minutes and makes a loop that takes in the waterfront/port attractions, downtown and Cabrillo Beach. It operates first Thursdays and weekends, so park the car (free) and don’t get in it again until departure.

Our 48 hours in San Pedro only scratched the surface. We’re eager to return to see the waterfront transformation, a $36 million project that will cover more than 400 acres. It will feature a central public gathering space and a promenade connecting attractions, points of interest along the harbor, retail and restaurants.