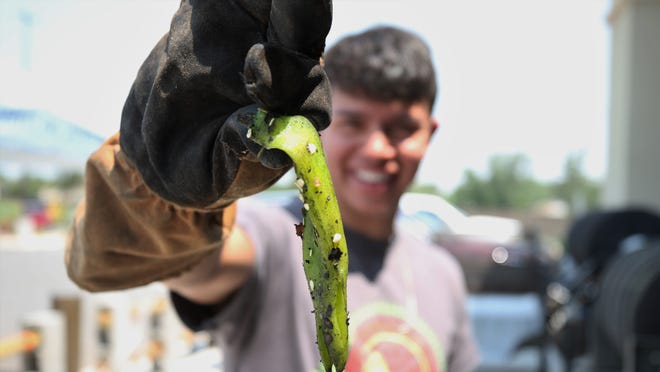 Green chile peppers arrived in Carlsbad a couple weeks early this year, meaning locals got their fix for the spicy delicacy as early as mid-July.

Heavy rains in the early summer weather meant the iconic New Mexico pepper could be produced earlier in the Hatch Valley and sent east across the southern portion of the state to the Cavern City.

At Albertsons Market the annual harvest brings hundreds of products to the grocery store for shoppers to choose from.

In the deli, there’s green chile in the chicken stew, cheeseburgers and quesadillas.

Over in the bakery, hungry shoppers can choose from green chile infused cheese bread, bagels, tortillas, even apple pie.

The store’s meat market sports a green chile bacon, kabobs and an a crab salad with a kick.

Store Director David Beaty said it’s all about embracing what makes southern New Mexico unique and what the region can offer the rest of the country.

He said Albertsons parent company the United Family recently began offering the peppery products at its stores in Texas and as far away as Idaho.

From about 10 a.m. to 5 p.m., the store fire roasts the peppers fresh outside in large metal tumblers, and customers line up eagerly in the parking lot to buy 20 pound cases.

Many will freeze the crop and serve it up throughout the year, crafting tasty morsels like green chile enchiladas or simply wrapping them in a tortilla with a slice of asadero cheese.

Beaty said the store’s goal is to reach $3 million in sales this year in its produce section alone, a goal he said he’s confident will be reached as Carlsbadians clamor for the acclaimed cuisine.

“I think this is our most popular seasonal event all year. This chile has been a long time going in New Mexico, but they’ve rolled into Texas. They’re even doing it in Boise, Idaho. It’s huge in all of our stores,” Beaty said.

“I think it’s the flavor of that pepper. I hear it’s because of the rich soil in that part of New Mexico. People just love hatch green chiles.”

He said he’d put the Hatch chile up against any other in the nation, even Colorado’s well-known Pueblo green chile.

“I think it’s one of those New Mexico items that we’re really proud of having in New Mexico,” he said. “It’s something they don’t have in other states. It makes us unique. Our chile pepper is better than anywhere else in the world.”

Labor shortage leaves more green chiles out in the fields

Despite the early yield this year, chile farming in the Hatch Valley about 40 miles north of Las Cruces didn’t go without its challenges this year.

Last year, it was drought.

Chris Franzoy, owner of Young Guns Produce, which supplies the Carlsbad Albertsons, said federal unemployment payments given to workers amid the COVID-19 health crisis meant fewer workers for the harvest.

As a result, Franzoy said a large portion of the crop was left in the field.

“We do need more labor. That seems to be the biggest issue,” he said. “They make more money staying home. It’s pretty simple. “We’re not able to harvest at our fullest capacity every day. We’re losing a big percentage of the crop in the field.”

The State of New Mexico recently announced it would earmark about $5 million in federal pandemic relief funds to increase the pay of chile pickers, per reporting from the Associated Press.

New Mexico Sen. Crystal Diamond (R-35), whose district covers multiple counties in the southwest region, thanked the State administration for the funding but argued more work was needed to address the labor shortage in the agriculture sector.

“While we cannot spend our way out of this problem, I hope this temporary aid will assist the family farms in desperate need of workers,” Diamond said. “Our agriculture industry is the backbone of our state’s economy, and for every community and family that relies on a strong harvest, this is a small step toward recovery.”

Even with the lack of workers, Franzoy said the extra two weeks allowed for an earlier harvest than he’s ever seen.

Since the first peppers were picked on July 12, Franzoy said his company harvested 200 million individual peppers weighing about 4 million pounds.

“That’s the earliest we’ve ever started. We hope that trend will continue because it’s nice to be able to serve New Mexico’s biggest staple over a longer period of time,” he said. “The flavor’s fantastic.”

And beyond the taste, Franzoy said green chile are burned into the culture of the Hatch Valley and readily shared with New Mexicans from the deserts in the east to the mountains in the north.

“It’s a way of life for so many people in the Hatch community in southern New Mexico,” he said. “It’s a product that people enjoy. Once they’ve had it, they won’t give it up. They won’t give up on this pepper.”