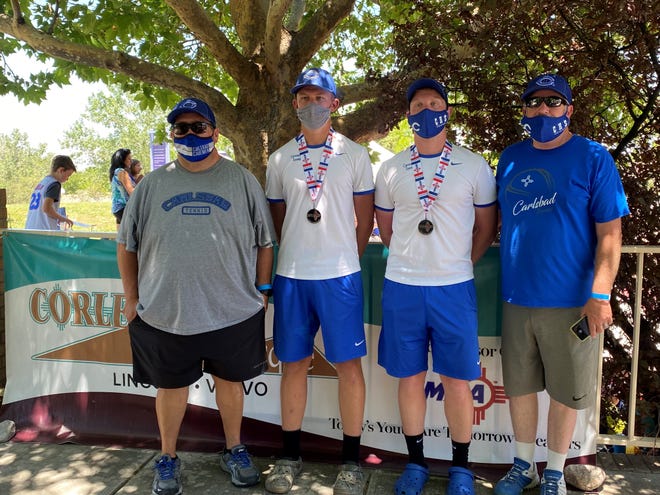 Carlsbad seniors Andrew Miller and Clayton Bluth only had about a month to learn each other’s playing styles on the tennis court. The short time together was good enough for the duo to claim the boys district title and earn them entry into the state tournament with the No. 2 seed.

Miller and Bluth bested Hobbs’ Antonio Armendariz and David Harris in straight sets and had to earn a hard-fought three-match win against third-ranked La Cueva’s Conner Thompson and Sam Abadie to earn their spot into the Class 5A championship match.

In Saturday’s championship match, Miller and Bluth faced No. 1 ranked La Cueva’s Alex Lumanog and Ryan Halloway, a duo that had 24 wins, all in straight sets. The duo’s lone loss was a three-set defeat against Eldorado on May 25. The championship match was no different.

“A year ago at this point Clayton wasn’t nearly as strong but he made the decision to work on his game and he made a tremendous amount of gains in a year’s time,” Gallindo said. “We knew we’d have a tough ride and for them to pull off the third-set win (in the semifinals) it was a big accomplishment. I’m very proud of the boys. That was not an easy match. They won second place. The team that won the state title didn’t struggle with anybody in the tournament. They were on the next level.”

Miller played in the 2019 5A state tournament with Aaron Overstreet, taking third place. The 2020 season was canceled due to the COVID-19 pandemic and with the short season made even shorter since Miller was playing basketball, he wasn’t sure if he’d come out for the tennis team.

The Carlsbad basketball team had its chance to compete in the state tournament cut short when the Cavemen had to forfeit the opening round due to a team member testing positive for COVID-19.

More:Carlsbad Cavemen out of 2021 basketball playoffs due to COVID-19, Artesia Bulldogs qualify

“That was when I decided I was going to play tennis,”. It was only about a month. I hadn’t really played during the last year but I’m really proud of what Clayton and I did to make it to the finals this year. Going out and getting a medal was great.”

Clayton Bluth spent the start of the tennis season playing doubles with his younger brother, sophomore David Bluth, before Miller and him joined up midway through the season. The duo went 10-1 to earn the No. 2 seed. Bluth said he expected a Top-3 seed and was happy with the seeding.

“It feels good. It’s nice to cap the year off with a medal,” Bluth said. “With this being my senior year I had to give it my all. My coaches said a lot of good players don’t get medals so it’s nice to work hard, cram all my training into a short period of time and have it work out.”

Cavegirls senior Harmony Lopez qualified for the 5A singles tournament and made the trip to Albuquerque with Bluth and Miller. During the season Lopez wasn’t sure if she’d compete at the state tournament in singles or doubles. When asked during the regular season Lopez said she wanted to go the singles route but she trusted her coaches who thought she and Kate Chester could make some noise in the doubles division.

“Harmony’s a good all-around player. She has the skills to be a good singles player and she also is very good at doubles,” Galindo said. “It was back-and-forth for us coaching staff. With the opening of the singles title we felt good that she could win her district and qualify for state. We took advantage of it.”

Lopez was matched up against La Cueva’s Cameron King, the No. 1 seed, and undefeated on the season, in the first round. King swept Lopez on her way to the state title never losing a set in the tournament.

“Harmony played her well,” Galindo said. “The score didn’t reflect it because it appeared a little worse but Harmony played much better than the score indicated. It’s never easy to win a state championship. It was a little unfortunate that she wasn’t a Top-4 seed and became a random draw and drew the No. 1 seed.”

Both Galindo and Lopez were content with the end result of the individual tennis season.

“Making it (to the state tournament) was already a great accomplishment for me. My freshman year I didn’t qualify,” Lopez said. “My sophomore year I qualified and then we didn’t have my junior year. Since it was my senior year I wanted to qualify. With COVID the restrictions would normally have 16 or more girls go (to the tournament) but they cut it down to only eight. That was scary because basically you needed to win district to qualify. I felt very proud. At the end of the match I talked with my coaches. They asked me if I gave it my all and I said yes. Knowing I did the best I could do made me feel a lot better.”

The Cavegirls team as a whole qualified for the team tournament at state with the No. 6 seed and will begin its quest for a title this week against No. 3 Farmington. A win against the Lady Scorpions sends the Cavegirls to Albuquerque on Saturday in the Final Four.