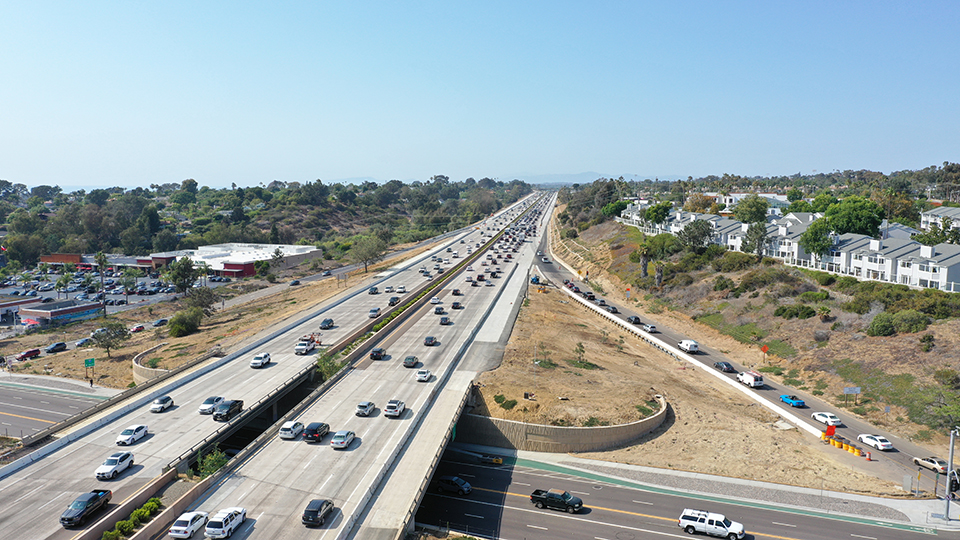 Drivers on Interstate 5 (I-5) in the cities of Carlsbad, Encinitas, and Oceanside, are met with a wide array of construction and safety signs posted throughout the corridor. In 2017, the Caltrans and SANDAG Build NCC project, the first phase of the North Coast Corridor program, made the safety of the traveling public a priority.

In doing so, Build NCC initiated a speed limit reduction between Manchester Avenue, in the City of Encinitas, and Palomar Airport Road, in the City of Carlsbad. Motorists were advised through signage to reduce speeds from 65 miles per hour (mph) to 55 mph.

As Caltrans and SANDAG Build NCC prepare to break ground on the Carlsbad to Oceanside Carpool/HOV Extension, they are initiating additional safety precautions. For the first time in California, Caltrans District 11 will implement a pilot program of temporary orange lane striping on I-5 within the construction zones between Palomar Airport Road in the City of Carlsbad to State Route 78 (SR 78) in the City of Oceanside.

Due to the recent rise in wrong way driving in the San Diego region, Caltrans announced the launch of a $9 million project towards improving over 60 exit ramps throughout San Diego County to help prevent wrong way drivers from entering the freeway. Part of Caltrans effort is to initiate a public campaign to educate the public about the danger of driving under the influence and wrong way driving. Although wrong way driving represents a very small percentage of the total collisions, they often result in fatalities and serious injuries.

Improvements proposed by the ongoing project include red on backside reflective pavement markings on the edge lines and the through arrows that can only be seen when a driver is going the wrong way as well as illuminated wrong signs and wrong way detection systems at select locations. These improvements have been proven to be effective at reducing reported wrong driving events by 44% to 64%.

Never drive under the influence and help end wrong way driving accidents. Call a friend, family member, or ride-share service for a lift to protect yourself and others.

To learn more about construction schedules and closures on I-5, visit KeepSanDiegoMoving.com/BuildNCC or text BuildNCC to 313131 to receive construction updates.